The following article is the result of research by Susan Blacker and is under copyright. 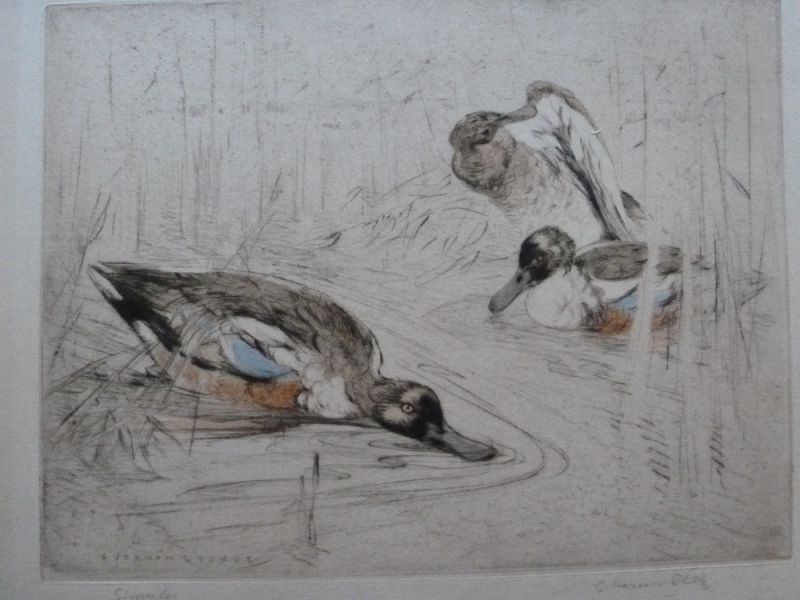 Best known for his book illustrations and coloured etchings of water fowl, game birds and working dogs,  the artist George Vernon Stokes (1873-1954) worked in a tradition established by Francis Barlow (1626-1704), responding to the English passion for natural history and rural sporting pursuits.  Working in the first half of the twentieth century Vernon Stokes would have been aware of the changes in class structure following on from the First World War, and his studies of game birds, terriers, hounds and retrievers do not usually include human figues.  Throughout the years 1930 - 1940 Vernon Stokes was living in Kent, and regularly exhibited at exhibitions of the Royal Society of British Artists, (RBA ). During these years he developed a characteristic style of tinted etching, produced in limited editions, usually of around 75. The drawing is crisp and well observed, and the compositions often feature strong diagonals, suggesting some influence derived from Japanese prints.

The records of the RBA are not illustrated, and some of the titles given to Stokes's exhibited works are ambiguous, but it is possible to identify several. In 1934 'Shoveler' is listed, and in 1932 'Cockers Winding'.

Vernon Stokes also spent time in the north of England, and has an address in Liverpool in 1940, and in 1930 Brampton, Cumbria. A painting of Salukis hangs in Tullie House Museum and Art Gallery, Carlisle.

As an illustrator he collaborated with Cynthia Harnett on several books, including 'In Praise of Dogs, an anthology of prose and verse', published by Country Life in 1936, and 'Getting to Know Dogs', Collins 1947. 'The Drawing and Painting of Dogs was published by the New Art Library in 1934.

A good selection of work by George Vernon Stokes is available at Fox House Fine Art, including  'Shovele'r and 'Cockers Winding'.